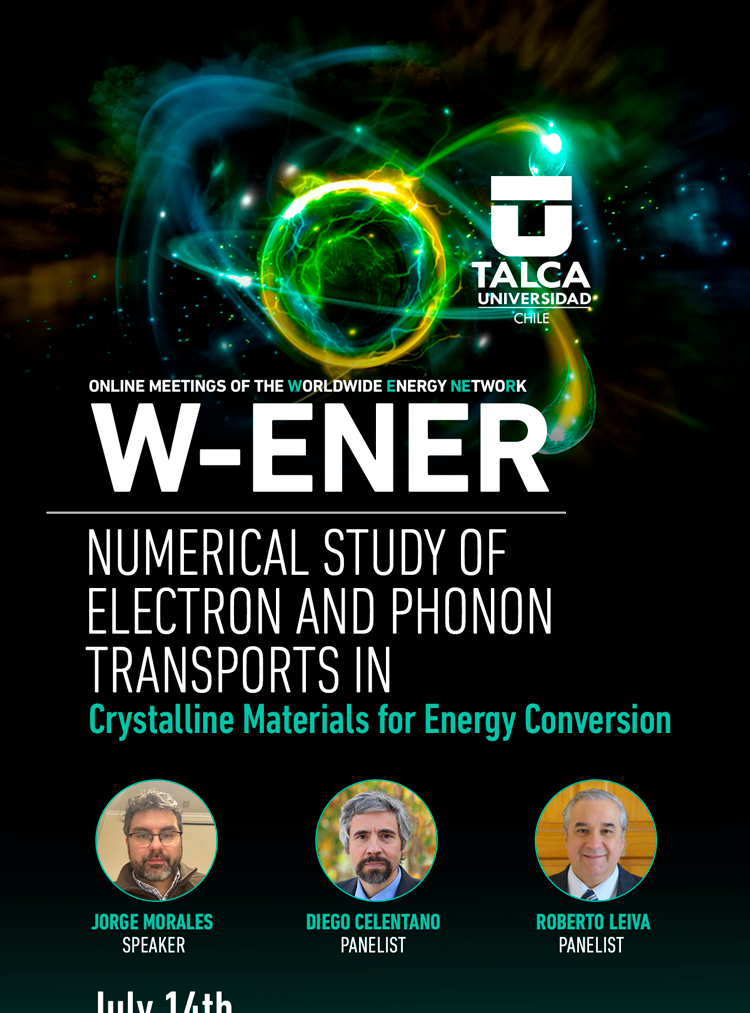 Do not miss the next session of W-ENER session 14th July 9:30 Online Meetings of the Worldwide Energy NEtwoRk
The Technological Center of Energy Conversion, in collaboration with Macrofacultad of the Faculty of Engineering of the University of Talca, is pleased to invite you to participate in the «Online Meetings of the Worldwide Energy Network», a space created to generate debate and discussion through the web on issues related to energy, particularly in the area of energy efficiency and clean energy generation.
The talk on July 14th  will be presented by Prof.-Dr. Jorge Morales, from the Mechanics School of University of Talca, The title of the lecture is Numerical Study of electron and phonon transports in crystalline materials for energy conversion
Abstract:

The continuous increase in demand of electrical energy has become a major concern for many countries. The world has seen a constant search for new alternative energy resources mainly focusing on resources that are environmentally friendly. One technology that goes in that direction is thermoelectrics. Thermoelectrics can directly convert a temperature difference into electrical current or vice versa. The mechanism behind such devices is the thermoelectric effect, which is referred to as the Seebeck or Peltier effect. A good thermoelectric material needs the simultaneous optimization of three key properties to reach a high efficiency, which can usually be characterized by the figure of merit (ZT): high Seebeck coefficient, high electrical conductivity, and low thermal conductivity. The study of thermal properties plays important roles in many applications as thermoelectricity and the thermal management of electronic devices. The aim of this study is to use numerical simulation from first-principles calculations using density functional theory and Boltzmann transport equation to calculate electrical and thermal properties of monolayer SnSe, SnS, GeS, GeSe, SnS2, and SnSe2, at different doping levels, helping evaluate their potential as thermoelectric materials.